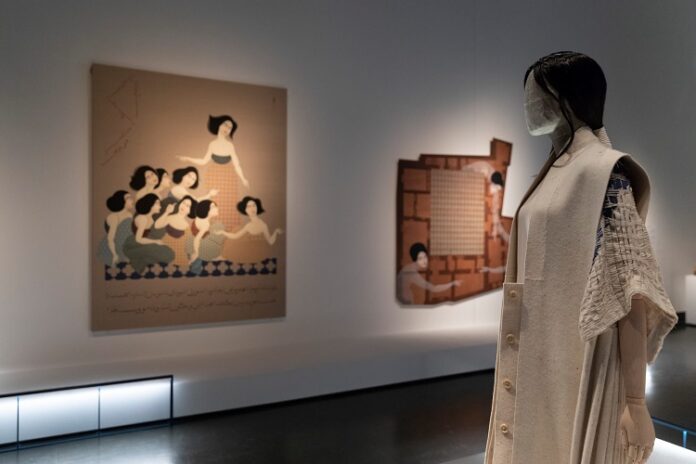 Are you looking for Islamic art online? In particular, are you looking for what we’d call “modern Islamic art”? By modern, we mean the application of modern, new materials and mediums in the realm of Islamic calligraphy art such as wall decals which are essentially vinyl stickers, stainless steel cut-outs and digital prints on canvas, leather, paper or even cups and plates.

Traditionally, Islamic calligraphy art was, and still continues to be, done on fabrics and carpets. Usually, calligraphy would be stitched with a golden thread onto a black fabric – the colours essentially derived from the golden band of calligraphy around the black cloth that covers the Kaaba, the central cubical structure in the direction of which all Muslims pray across the world (the Kaaba is located at the Masjid Al-Haram in Makkah, Saudi Arabia). Islamic wall carpets, another traditional form of Islamic art, are slightly different. Mostly handcrafted in Turkey and parts of Asia, these carpets are pretty ornate – densely filled as they are with floral motifs and patterns. The borders are thick and elaborate and at the centre is a passage of the Holy Quran that has been diligently stiched. Once up on the wall, it can serve as a spiritual reminder for those who live in or visit the home.

The most popular among the new innovations are wall decals – these self-sticking vinly stickers can be directly pasted on to the surface of the wall without any need for framing or even drilling a hole into the wall for the purpose of hanging on a nail. The side that is exposed has Arabic calligraphy of an ayat from the Holy Quran. The second popular category is digital prints on canvas or paper – which involve many colours and need to be framed. They almost resemble paintings. Both decals and prints, because of their replicability, are often easy on the pocket. Metallic or stainless steel frames, on the other hand, are often expensive because of the amount of time required to make them. They still are not so frequently available compared to the other two categories.

Another modern and a very significant shift in Islamic wall art that one can see is the display of English translations below the original Arabic verse. This shift, in essence, reiterates two things – one, the fact that most Muslims today are not Arabs, and two, the spiritual aspect of Islamic calligraphy art. The English translation helps the non-Arab person to read, understand, and ponder over the message.

In the era of social media and e-commerce platforms, one can buy Islamic art online, in particular, modern Islamic art. You are likely to find many such pieces on not just generic stores but also boutique stores that specifically cater to people with an interest in home décor, art and gifting.

What Are The Common Reasons For Pest Infestation At Homes?

5 Steps To Your Remodeling Project

How to Choose an Ideal Scroll Saw?

Getting a New Garage Door Will Be Convenient

All You Need To Know About Wood Fired Hot Tubs

Installing a Stove – What You Need to Know

The Cleaning You Need

How to Landscape Your Garden

What Can a Team of Electricians Do for You?

Find a Good Decorator to Get the Right Look for Your...

Top Benefits of Having a Wooden Staircase